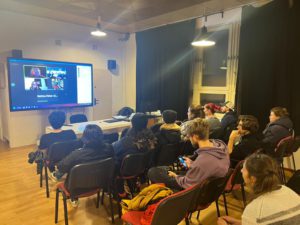 AMPAS evening focused on independent film with guest speaker and producer Finola Dwyer from NZ, who lives and works in London, England. Some of her well known feature films include Brooklyn and An Education.

The Academy of Motion Picture Arts and Sciences (AMPAS) is the group behind the Oscars.

Special thanks to FAMO friend and teachers, producers Jiri Vlach and Petr Horak for organising the event.