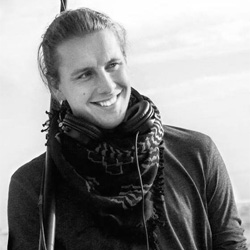 Jan Bezouška graduated on FAMO in Pisek in 2008. Thanks to the cooperation of FAMO and the West Virginia State University, Jan could get his Master´s degree in the US.  After successful completion of graduate study at WVSU he continued at the USC School of Cinematic Arts (Film & TV Production).

His passion for sound design is put to use in a number of short films, which have won awards : Jan won eg. at the Sundance Film Festival with movie “Fruitvale Station” (2013) and “Lake Los Angeles” (2014).

In recent years, he traveled to Jordan and South Africa, where he worked on two documentaries. He is currently working on a large number of feature films and is dedicated to audio postproduction.