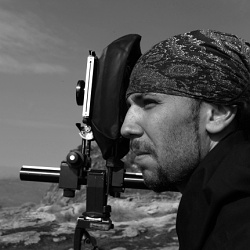 He is the author of more than 8 documentaries, most of which competed at international film festivals.

Among the most successful films belongs “Africa obscura” (three times awarded!). In 2010, Jan organized a photographic expedition called “Fotografické návraty” (Photography comebacks), during which he photographed in the inhospitable lands of northern Kenya by old analog technology and developed films in the portable dark room.

Jan is currently working on a new international independent film project “Archa světel s stínů” (The Ark of lights and shadows), for which he met with director Werner Herzog.

Jan´s films are characterized by deep and long-term focus on selected topics, which uncovers new and often surprising contexts. He is trying to destroy cultular and social stereotypes, through his films.  He focuses on environmental issues as well, cooperates with the international festival NaturVision, where he sat as a jury member.

Jan cooperates (long-term) with Czech Televison and Czech Radio.  He is also the artistic director of the festival “Doteky Afriky” (Touches of Africa).