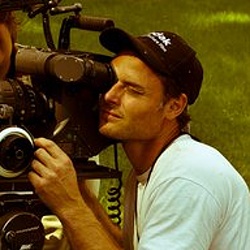 To study at the Film Academy of Miroslav Ondricek in Pisek was, as he says, one of the key moments of his life, drawing a line under the previous life. The decision that have influenced Michal´s world, which he failed for. The world he sees, or creates through the camera lens.

During his studies, he worked with leading Czech cinematographer and director, F.A. Brabec. First, as an assistant (“Máj”) and as an assistant camera operator of action scenes, for example “Kájínek” and finally as a second cameraman, eg. the very first 3D movie in Czech Republic “V Peřině”. At the same time he worked on other films and series, either as an assistant, camera operator or as the lead cameraman on his short student films, for example “Malá pražská víla”, “Prstýnek” and graduation film, when Michal filmed one of the Erben´s poem “Lilie”.

Michal made hundreds of short reports and journalism and documentaries – mainly for the Weekend magazine, studio Live shows (Breakfast with NOVA, TV News) for NOVA TV, for the past 10 years.  Michal also worked on currently starting new program called Upgrade. He makes video clips as well, for example for the singer Kristina the clip Break-up reggaeton. Michal made also commercial projects such as advertising.

With camera he traveled the world from Asia to Amerika. He met with world famous professional people and worked in places where would the average person did not get to.